Tulip featured on The Art of Manufact...

Machine Monitoring is about much more...

5 Things to Know About the Hidden Factory

Every month, we host a meetup on a different topic. This month, John Carrier, a Senior Lecturer of System Dynamics at the MIT Sloan School of Management, spoke about uncovering the Hidden Factory. Since 2006, Carrier has worked with Arsenal Capital Partners as director of Six Sigma, where he is responsible for increasing portfolio company valuation by adapting and applying Six Sigma techniques to midsize companies.

Here are some of the key lessons we learned from this talk. To stay in the loop about other talks and events, join our community at the Boston Manufacturing Meetup.

1. What is the Hidden Factory and how does it emerge?

The Hidden Factory refers to parts of a manufacturing process that decrease the quality or efficiency of an operation.

The Hidden Factory forms when a defect flows downstream. When the defect is caught, a workaround is created as it is removed from the line, fixed, and placed back on the line. This may solve the problem in the short term, but when you do the same thing over and over again, the workarounds add up, and a hidden factory ultimately develops. 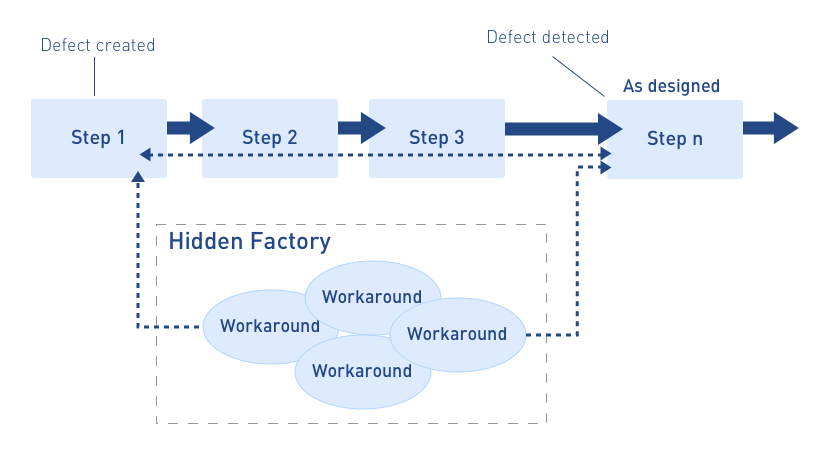 A hidden factory is rarely the result of one problem in a process--if this were the case, it would be easy to solve. Rather, it is usually caused by multiple problems in a mixed system that must be solved at the same time.


2. What are the consequences of the Hidden Factory?

If a product goes through a hidden factory, it not only costs more to produce, but it also decreases the value that the customer receives. The Hidden Factory creates a long, slow feedback loop when you would rather have shorter, smaller ones. A hidden factory is a part of a process is unplanned and unpaid for--in fact, according to Dr. Armand Feigenbaum, up to 30% of activity in a factory is unplanned.

3. How can you recognize a hidden factory?

A sure sign that hidden factories are appearing is when inventory or WIP begins stopping because the system can’t keep up with demand--just like in this famous clip from the show I Love Lucy, when Lucy and Ethel can’t wrap the chocolate quickly enough and must deal with additional chocolate as it comes down the line.

Ironically, when we ask people to work faster as demand rises, the work actually slows down because the amount of inventory that diverts into the hidden factory increases.

4. How do you solve the hidden factory?

You can solve or reduce a hidden factory by shortening the feedback loops within it. In order to reduce the hidden factory, you need a system in place to quickly identify what needs to be fixed and how to fix it quickly.

5. How can Industry 4.0 solve the hidden factory?

Since the cost of sensors has significantly decreased with the rise of Industry 4.0, identifying and solving issues within a hidden factory has become dramatically more accessible. Capturing data from strategically-placed sensors and creating Pareto charts can provide the insights you need to identify the root causes of issues that need to be solved in order to shorten the feedback loops within the hidden factory.